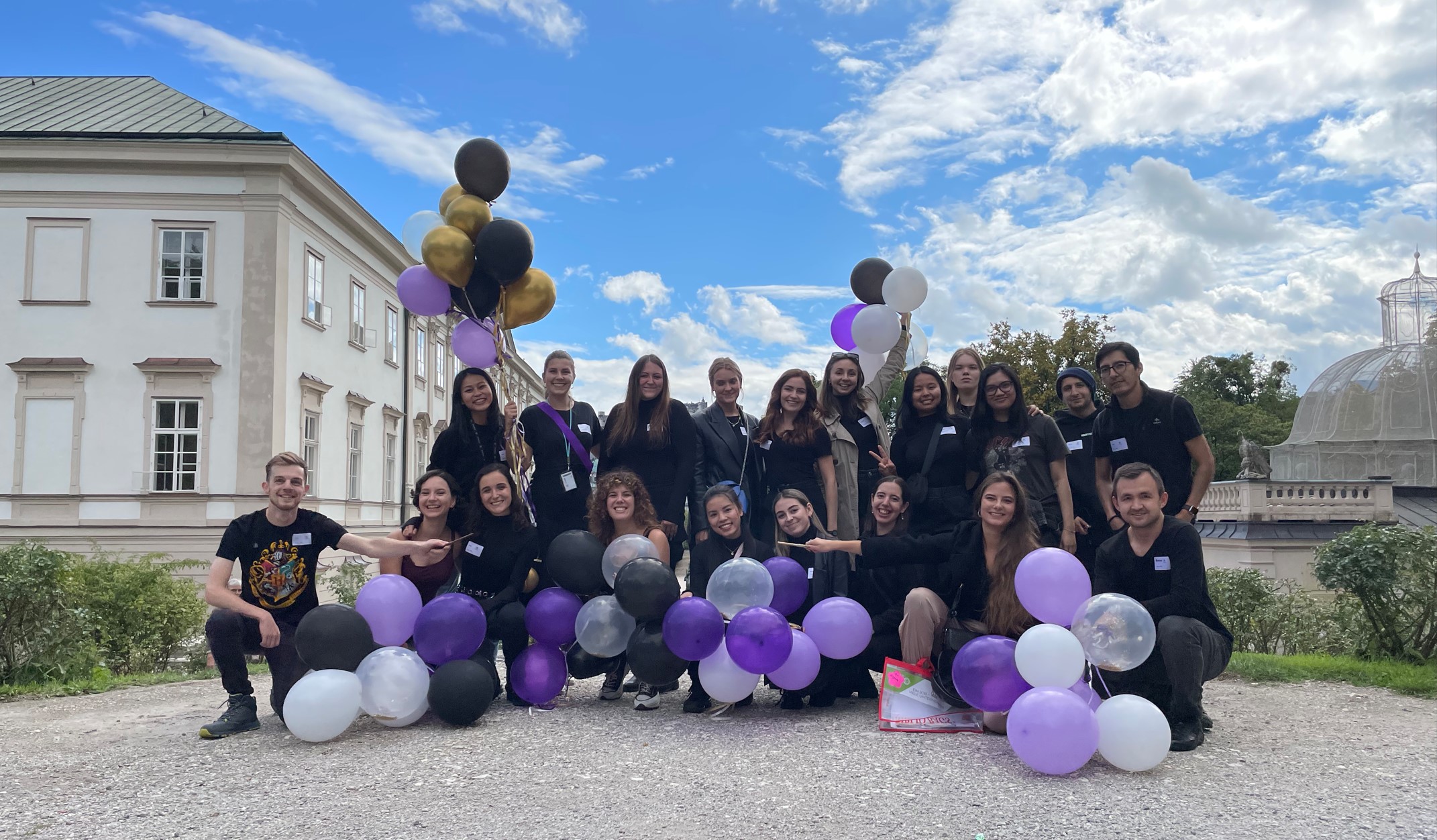 What is the best way to creating an event? Imagine it, plan it, and experience it!

On September 26th 2022, the third-semester Innovation and Management in Tourism Master’s students organized a hybrid event to welcome the new cohort at FH Salzburg, as part of their Experience Design course. They became experience creators, headmasters, and magicians in order to offer an unforgettable welcome event to the newly arrived Master’s students of the first semester.

Getting started – creating an unforgettable event

The third-semester students had been imagining, planning, and creating this event for over four months. To accomplish such an adventure, they split into five main teams: Storytelling, Scenography, Marketing, F&B, and Logistics.

The purpose of the event was to guide the new students to find their magic, meaning learning to connect with each other, understanding their strengths, and overall creating an unforgettable day for everyone. The experience consisted of two parts. The first, hybrid part took place at FH Salzburg until mid-day involving the online students. The second part of the event was organized in the city of Salzburg where a magical Scavenger Hunt took the students to known spots and also a few hidden places throughout the city.

Spark magic: Which magical creature are you?

On Monday at 9 AM, the third-semester students dived into their role as headmasters and warmly welcomed the new students with coffee and biscuits. Simultaneously, tarot cards with different magical creatures including dragons, mermaids, harpies, unicorns, phoenixes and wizards, were randomly distributed among the students which was their ticket to enter the event.

Each magical creature, as they saw on their cards, represented a specific character. Until the end of the first activity – the so-called ‘Magic Circle’, they had the opportunity to swap their cards with their fellow students, in order to get the creature most suited to their personality. The tarot cards were then later used to create and mix teams for the activities.

After being onboarded into the magic event, the students crossed a symbolic threshold from one room to the other and started the Magic Circle activity in a beautifully decorated room. Here the students sat across each other in an inner and outer circle and were given several questions to discuss and to get to know each other better. Differences, similarities, and misunderstandings were encountered, yet the magical atmosphere encouraged them to go beyond their initial shyness and become actively engaged.

After this first adventure, the new Master’s students took a small break to prepare for the most sensational experience of all: ‘The 5 Senses’. Students at the FH, as well as the ones online, had the chance to solve the mystery of fellow classmates’ origins. Four nationalities were chosen from their class and five sensory stations were set out (smell, taste, feel, hear and touch), each one with information that could only be solved by using their one sense at a time!

Bundling powers and board on a Magical Quest in Salzburg

After lunch, the event for the online students came to an end and for the students who attended the event in person, the magic continued at the Mirabell Garten in the city of Salzburg. Now that the students confirmed their own magical identity, it was time to bundle the strengths of different creatures to go successfully finish the last activity: The Magic Quest through the city. New teams were created with a combination of all different creatures in three teams together.

The aim of the activity was to conquer the skills they need to start their magical adventure as new students at FH Salzburg and as new inhabitants of the city, developing patience, knowledge, teamwork, endurance, creativity and open-mindedness. Throughout the city, eight different stations were set up. Each station was prepared with different activities and challenges to be resolved as a team, ranging from mindfulness activities on the very top of the Mönchsberg top, to chasing dwarfs in the Mirabell Garten.

When the students returned from their magical journey, there was time for reflection, and sharing of experiences and learnings. At the end of the day, new friendships were born, and the third and first-semester students of the IMTe Master programme concluded the day with a wonderful dinner at a local restaurant.

Some of the new Master’s students expressed their gratitude in different ways:

“The event was lit from the start to the end. So many surprises along the way”

“Thank you guys for organizing today’s event. It was truly magical”

“I’m incredibly proud of our class and how we worked together not as a group but really as a team to make magic happen for both the new students and ourselves. Our hard work in the months and weeks leading up to the ‘Find your Magic’ event paid off and we can look back at it with a sparkling smile”.

All in all, the journey of magic underlined the importance of building friendships, team morale, and keeping the creativity, spirit, energy, and commitment as you travel through the exciting and sometimes challenging paths of the Innovation and Management in Tourism Master programme at FH Salzburg.

Never forget: a little magic can take you a long way!